KOVOZOO is inhabited by life-size animals made of scrap metal. You can look into the eyes of the 2-ton rhino Norbert, look up at the 5-meter giraffe Safira and her cub Melmen, there is also a lion district or a herd of elephants, crocodiles, walruses, camels, monkeys, horses, whale, backyard animals and many, many others. In total, there are already almost 300 animals of different kinds, sizes and weights in KOVOZOO. The goal is to reach 456, which is the number of live animals in the smallest zoo in the Czech Republic. 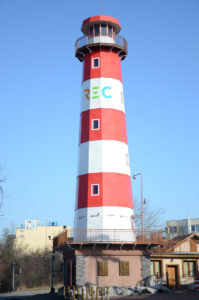 The ŠROTÍK lighthouse lookout tower can be seen from long distance from Staré Město and navigates visitors to KOVOZOO.

It is one of our main symbols……ŠROTÍK is a terrestrial lighthouse and helps everyone to find a way in „the sea of waste“.

„With us you can´t get lost in the sea of waste!“

Guided by the ŠROTÍK lighthouse, a ship with the name The HOPE is quietly swaying in imaginary waves. So get up on the board! 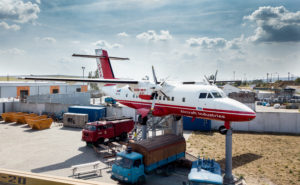 An L-610 commuter aircraft “landed” at KOVOZOO…. The first prototype of aircraft, which was developed more than twenty years ago by the worldwide well know aircraft production company LET Kunovice . It is the biggiest commuter aircraft that was designed in the Czechoslovak Republic and also the first with a pressurized cabin and integral fuel tanks. It made its first flight in 1988 and never entered serial production. The aircraft is accessible to visitors also inside.

KOVOZOO also has its own Maternity Hospital – a space for the birth, treatment and regeneration of metal animals. The Maternity Hospital is a place where the creators of metal animals (we call them midwives) meet and together they indulge in creative designing and cooking (welding :-)), where the result is always something special… whether a new animal for KOVOZOO, or moments spent together with great people, whose hearts are burning for the same thing and their hands are not afraid to take up work  whether it is director or worker. 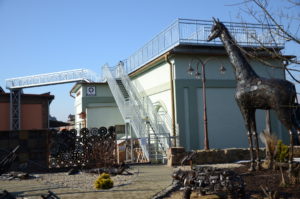 Footbridges will take you through the world of iron waste proccesing. At present, 220 m of footbridges are in full operation, leading from KOVOZOO through the roof of the Maternity hospital and the  Congress Center  to the roof of KOVOSTEEL Recycling maintenance building . 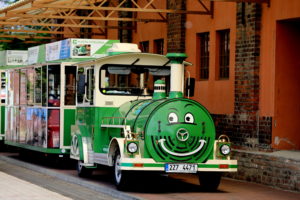 STEELINKA is our road train that will take you on journey info the real life od companies focused on waste recyclation. During the summer holidays STEELINKA runs according to the timetable.

The Veterans Museum is original indoor exhibition of historical cars and motorcycles. We have prepared it in cooperation with the Slovácký Veteran Car Club Uherské Hradiště. We try to show the veterans world as it is, in all its diversity, differences in types, ages and models of cars from 20s until 70s of  the 20th century. In our museum you will find 60 unique exhibits as Ford T Roadster, Cord 812 Westchester, Bentley S1, Packard, Vauxhall etc.

Sowing and mowing machines, grain threshers, blowers and other agricultural machines from the time of our grandparents can be seen throughout KOVOZOO.